Bob Baffert (Authentic, first) – “Unbelievable. I’m worried about Jimmy (Barnes). He broke his arm, what happened. All I can say is this horse ran out of his mind. Johnny V. –perfect ride. I owe it all to my crew. Jimmy, poor guy is in an ambulance right now, can’t enjoy it. This is so emotional the ups and downs in this game. Unbelievable.”

“I have a lot of emotions running through my mind right now with Jimmy not able to be here. We knew that horse (Thousand Words) could be a problem. Jimmy has a broken arm. The key to this race was the break. We’ve been planning this out the last couple of nights at Jeff Ruby’s. We knew we had to get away from there. We talked about where certain people would be. Johnny is a world class jockey and knows where everyone should be. I told him what I thought and he told me what he thought. I said ‘I like your plan.’ I told him what the horse likes and what he can do. I’ve been fortunate to have some great jockeys, this race was won by Johnny, just the way he handled the horse and how he finished. He earned this. He beat a really good horse. Tiz the Law is a top notch horse. I feel bad for the connections. I’ve been there. But, this never gets old. We just feel so fortunate and blessed.”

Did you think he’d get there? “I thought he would, because he usually moves away from them. What can you do? It’s a horse race.”

On glue-on front shoes: “He’s run every time” in them.

Did he run his race? “He’s run well every time. He ran a good race today. He got beat.”

Jack Knowlton, managing partner Sackatoga Stable, owner of Tiz the Law: “I’m the only person who returned from the Funny Cide days, so we had a whole new group of people, their first experience in the Kentucky Derby. Even though it didn’t turn out the way we hoped it would, certainly no shame in the race he ran. He’ll be back. Hopefully he’ll come out of the race well and we’ll look to go onto Baltimore and hopefully win that and get some revenge.”

“Obviously we’d hoped to win. He was a big morning line favorite, went off odds-on. But it just wasn’t to be. Authentic ran a tremendous race. It was a fast pace, and he never came back. Tiz has been able to pass horses all year and today he ran into one he couldn’t get by.”

“At the top of the stretch, the way he’s been running all year, basically Manny (Franco) hasn’t had to ask him. Manny was asking him and he was trying. Authentic ran a great race. We’re going to see probably a big speed figure in there, and he deserved to win. He got the inside trip, and obviously our plan was to be outside. It’s worked all year. When you look probably at the number of the feet each of the horses ran, when it’s all said and done we probably ran quite a bit farther, farther than we got beat. But that was our plan, that’s the way this horse likes to run. Credit Authentic, I mean he came from the far outside and managed to get to the lead and just ran a great race. No shame on our part.”

On trying to beat Baffert in the Derby: “I know. He had his horse sharp. I didn’t think he was going to be the winner. I talked to him the other day and he certainly was full of praise for our horse. But Bob, he’s got the magic touch. He had this horse ready at the right time and he beat us today. Hopefully we’ll get some more shots at him and we’ll turn the table on him.”

“As long as he comes out of it healthy and sound, let’s go to Baltimore. Let’s go to the Preakness.”

Bret Calhoun (Mr. Big News, third) – “He ran huge. Quite a thrill. Going to the three-eighths pole, I thought we had a chance to win the whole thing. They didn’t quite come back to us. Just an incredible race on his part.”

On considering the American Turf in his turf debut but then opted for the Derby: “I kind of planned this thing a month before when it didn’t look like it would be a full field and I knew it was going to be an option. We were able to train on the grass a couple of times and it was very wet, soft and it didn’t really look like it was going to work for on this course. We were able to get in the Derby at a mile and a quarter over a track where he’d been training really, really good. It was worth taking a swing.”

Thought on the winner: “Very impressive. I’ve watched that horse train since he got there. Both of Bob’s horses I thought looked really good and trained well. But he earned it today. They went fast and he stayed on.”

Chester Thomas (owner Mr. Big News, third) --“You know what, Gabe (Saez) did a wonderful job. The horse ran his guts out and we’re really proud. It’s just exactly what we wanted and I thought we were going to get the job done but those other two horses are awesome horses, congratulations to those connections. We just couldn’t be prouder. I stayed up until 1 a.m. Sunday night figuring out if I was going to run in the turf race or the Derby and you see where we ended up.”

John Shirreffs (Honor A. P., fourth) – “(Jockey) Mike (Smith) said he was laboring at the beginning, that he just wasn’t getting a hold of the track.”

Steve Asmussen (Max Player, fifth) – “The inside post hurt him. He stood there too long and didn’t break well. He left himself a ton to do, but got up for fifth late. Just too much in front of him.”

Peter Eurton (Storm the Court, seventh) – “I was extremely proud of his effort and that is my first and foremost thought.”

Saffie Joseph Jr. (Ny Traffic, eighth) – “I thought he was sitting a good trip but then he got in a little tight and after that he was done. But he just came by and he lost a front shoe and is cut up pretty good is in front and behind. We’re going to make sure he’s OK.”

Chris Hartman (Necker Island, ninth) – “I think he ran all right. I’ve got to watch the replay. He got a long ways back and that really wasn’t our game plan. We didn’t want to be wide. We wanted to be on the inside. But a lot of things happen you know. A lot of horses. So we had to go around everybody. But it is what it is. He made a nice run. There’s not much more we can do there. Outclassed.”

Greg Foley (Major Fed, 10th) – “It was an amazing opportunity to run in the Kentucky Derby. We got in a really bad spot early in the race and James (Graham) had to fight him pretty hard.”

Dallas Stewart (Winning Impression, 12th) – “We’ll get them next year.”

John Velazquez (Authentic, first) – “It’s always a concern that you let the horse do too much early in the race. You like to save ground and save some horse for the end. Bob (Baffert) was pretty certain the horse was ready today. I let him get loose and get comfortable. I waited until the horses got to him to get after him and he responded right away. Bob kept telling me to make sure I saved that last eighth of a mile. I want that eighth of a mile. He said I want you to hit left-handed and he responded. It worked out the way we had planned it. Very proud of the horse.”

Manny Franco (Tiz the Law, second) – “I had the trip that I expected. He just couldn’t go by the other horse. The other horse fight so hard. He was ready for today too.”

(Did it set up as expected?): “Perfect. I thought I was going to be right there third or fourth, and the trip was perfect, no excuse.”

Gabriel Saez (Mr. Big News, third) – “I had a trip. That was what I was hoping for, you know, to get the right trip. Stuck in close, give him time to really, really run. They went on – they’re really nice horses. My horse tried his guts out.

They never really came back to me. They were still running on the front end. He ran a huge race. I’m really proud of him.”

Mike Smith (Honor A. P., fourth) – “I was proud that he still put in an effort and ran OK. It wasn’t his best race by no means. I never dreamed he would struggle with the track. When we saw him train over the track this week, he was bouncing over it, but it was sloppy. He seemed to like that. His deepier, cuppier track – he has a big ‘ol flat foot. He just couldn’t get a hold out of it.

Question: Did he break awkwardly? “He spun out from the word go. Really did.”

Adam Beschizza (Enforceable, seventh) – “He ran a good effort. I just don’t think the pace came back enough for him.”

Joe Rocco Jr. (Winning Impression, 12th) – “It was definitely a weird situation with no fans. It was still the Derby nonetheless.”

Tyler Gaffalione (South Bend, 15th) – “I had a good trip. I let the speed go. He settled nicely, made a nice move around the turn. Just flattened out late. Just might be a little too far for him.” 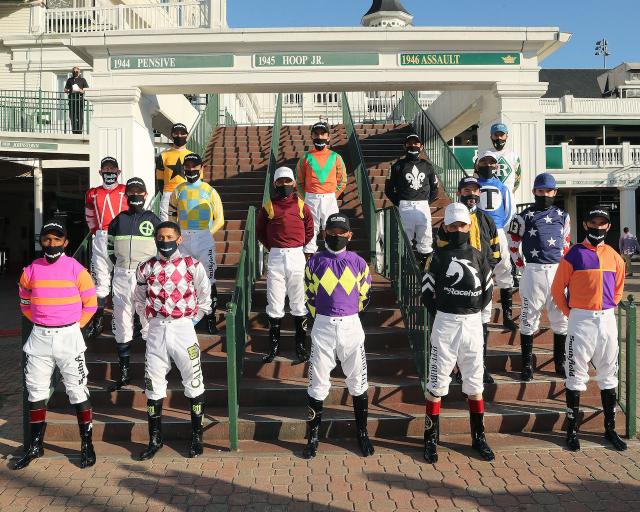