Korea Racing Authority’s trailblazer Knicks Go, the top-rated horse for this year’s Breeders’ Cup Classic (Grade I), went right to the front and never looked back as he easily dismissed his five rivals to win Saturday’s $337,000 Lukas Classic (GIII) at Churchill Downs by four lengths over Independence Hall.

Knicks Go, ridden by Joel Rosario and trained by Louisville’s Eclipse Award-winner Brad Cox, stopped the teletimer in 1:47.85 – a stakes record for the eighth running of the race and only .57 off Victory’s Gallop’s 1999 track record of 1:47.28.

“We’re excited to get this race under our belt,” Cox said. “He’s a fast horse and he’s dangerous when he gets to show that speed around two turns. Joel gave him an easy trip on the front end. He seemed like he was able to take a breather and open back up around the turn. On to the Breeders’ Cup.”

Sent to post as the red-hot 1-9 favorite, Knicks Go broke alertly from post position No. 2 in the field of six older horses and dictated the terms throughout. He had a half-length advantage over West Virginia Governor’s (GIII) winner Sprawl into the first turn with Pegasus World Cup (GI) third Independence Hall also chasing, but then Knicks Go deliberately kicked a length clear down the backstretch with the first quarter mile in a modest :23.53 and the half in :47.27.

Knicks Go displayed his world-class superiority on the far turn, breaking the chasers’ hearts after six furlongs in 1:10.90 with Independence Hall, Sprawl and comebacking $3.7 million-earner Tacitus under a full drive. Knicks Go had a two-length jump on his inferior rivals at the top of the stretch as Independence Hall attempted to close the gap from the rail, but it was futile. Knicks Go’s class was undeniable and he drew clear in the final furlong without much urging from Rosario.

“I kept him off the rail today a little bit but he was going very easy,” Rosario said. “He’s a really fast horse and he did what he needed to do. He’s always been an impressive horse to ride and always been quick. Today he did things very easily and now on to bigger things.”

This was Knicks Go’s fourth stakes win in six starts this year. His year started with a 2 ¾-length victory in the $3 million Pegasus World Cup (GI) at Gulfstream Park. After back-to-back fourth place finishes in the $20 million Saudi Cup (GI) and $1 million Metropolitan Handicap (GI), the 5-year-old bounced back with a 10 ¼-length win in the $300,000 Prairie Meadows Cornhusker (GIII) and followed that with a dominating 4 ½-length score in the $1 million Whitney (GI) at Saratoga.

His next target is the $6 million Breeders’ Cup Classic (GI) on Nov. 6 at Del Mar.

Tacitus lost a head photo for third and was followed by Chess Chief and Spawl.

Knicks Go, a gray or roan son of Paynter out of the Outflanker mare Kosmo’s Buddy, was bred in Maryland by Angie Moore.

The Lukas Classic honors the iconic 86-year-old Hall of Fame trainer D. Wayne Lukas. The four-time winner of the Kentucky Derby and Kentucky Oaks and conditioner of 26 Eclipse Award-winning champions has been based at Churchill Downs’ Barn 44 since 1989. He was on hand to present the trophy. 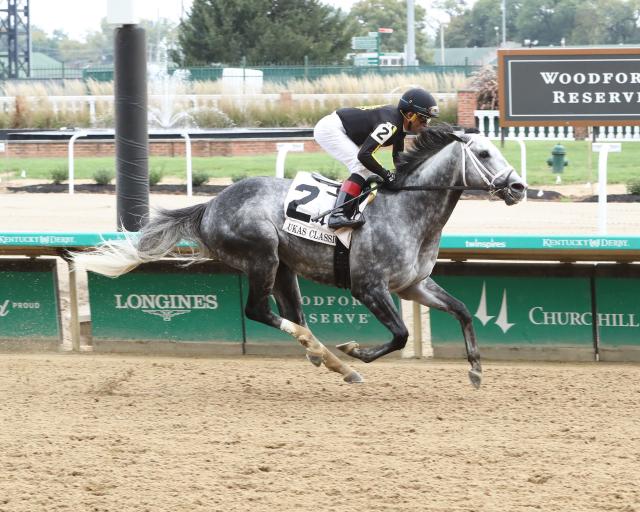