There are more than 40 horses competing at this year’s Breeders’ Cup World Championships with local ties including 19 horses that were based at Churchill Downs. Several trainers and handicappers have been watching and studying the local contenders and gave their selections:

Phil Bauer (Trainer): “I’m most looking forward to seeing Dennis’ Moment. I think he’s a very special horse and has shown the same, if not more, talent than Not This Time.”

Tim Glyshaw (Trainer): “I’m excited for Vickie Foley’s horse (Hog Creek Hustle). This horse has some of the same storylines as my previous Breeders’ Cup runners because he is coming from a smaller stable.”

Buff Bradley (Trainer): “I think Covfefe should be pretty tough to beat and I’m rooting for Street Band as well.”

Norm Casse (Trainer): “Dale Romans’ horse (Dennis’ Moment) is very special. This horse has done everything the right way in his career and looks extremely talented.”

Ed DeRosa (Brisnet.com Handicapper): “Identifying a best bet is always a tricky business. I see Dennis’ Moment and Sistercharlie as the most likely winners between the two days but at or around 6-5 on both is hardly exciting. One horse I am excited to bet is Owendale in the Breeders’ Cup Classic. This horse is going the right way and seems poised to deliver on the promise that encouraged trainer Brad Cox to run in the Preakness. In a year where the handicap division has not separated itself, Owendale can step up to win.”

Joe Kristufek (Churchill Downs Handicapper): “I love Stubbins in the Turf Sprint. Two races back he closed against the speed bias to finish second at Kentucky Downs and last time out he overcame a tough trip to prove his class at Keeneland. He won at this trip earlier in his career at Santa Anita, (Flavien) Prat is a good fit and the price is right at 12-1. His stablemate Legends of War also has a big shot. Looks like Doug O’Neill is holding pocket aces.”

Scott Shapiro (BetAmerica Handicapper): “Six furlongs is a bit shorter than ideal for Catalina Cruiser but he should get a great trip off a lively pace and be full of run late.”

The following locally based trainers and jockeys are set to compete at this year’s Breeders’ Cup:

Churchill Downs will simulcast the Breeders’ Cup World Championships from Southern California’s Santa Anita on Friday and Saturday. Churchill Downs will run 10 races those days beginning at 2 p.m. and 2:15 p.m., respectively. The first 5,000 fans in attendance on Saturday will receive a free 2020 Churchill Downs Wall Calendar, presented by Humana. The colorful calendar features major event listings and vivid and memorable images from the Kentucky Derby and around the historic racetrack.

When live racing concludes on Friday at 7:17 p.m. and Saturday at 8:10 p.m., simulcast wagering on the Breeders’ Cup will continue in the ITW area on the second floor of the Clubhouse, as well as reserved dining spaces and the Horsemen’s Services Center. Customers who attend Churchill Downs on Friday will be able to advance wager on the entire Championship Saturday program from Santa Anita. There is no advance wagering on-track Thursday for the Championship Friday program.

MYLADYCURLIN MADE 5-2 FAVORITE IN CHILUKKI, RECRUITING READY 5-2 CHOICE IN BET ON SUNSHINE – Saturday’s stakes doubleheader at Churchill Downs will feature the 34th running of the $200,000 Chilukki (Grade III) where Sather Family’s multiple stakes winner Mylady Curlin was tabbed as the 5-2 morning line favorite while Sagamore Farm’s speedy Recruiting Ready will take the stage in the $120,000-added Bet On Sunshine as the 5-2 choice.

The one-mile Chilukki is slated as Race 8 with a post time of 6:42 p.m. while the six-furlong Bet On Sunshine is carded as Race 10 at 8:10 p.m. Churchill Downs will have a special late post of 2:15 p.m. on Saturday to run intermittent with the Breeders’ Cup World Championships at Santa Anita.

In the Chilukki, Mylady Curlin (8-5-1-2—$422,605) will cut back in distance following her third-place effort in the $200,000 Locust Grove (GIII) in September. Trained by Brad Cox, Mylady Curlin’s last four starts took place at distances of 1 1/16 miles or greater and the Chilukki will be the first time the 4-year-old daughter of Curlin will compete around one turn since Feb. 1 at Oaklawn. 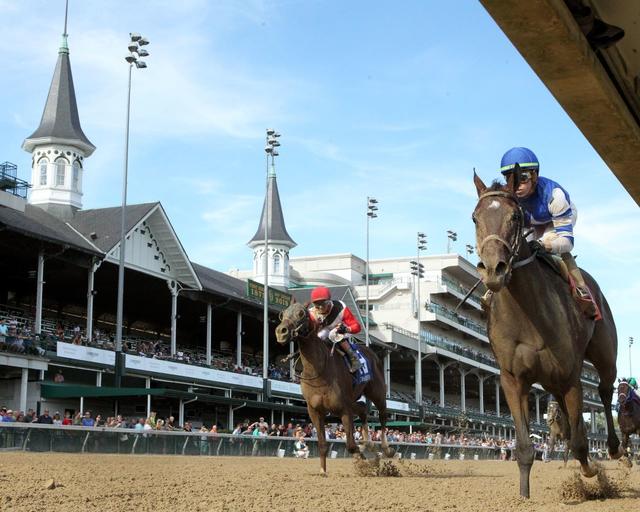