Flying P Stable, R. A. Hill Stable and Flying Partners’ Lone Rock shook off a bid from Hosier at the head of the stretch and cruised to a 7 1/2-length victory in the fourth running of the $160,000 Isaac Murphy Marathon Overnight Stakes for 4-year-olds and up Tuesday afternoon at Churchill Downs.

Trained by Robertino Diodoro and ridden by Ramon Vazquez, Lone Rock completed the mile and a half on a muddy track in 2:33.49 in successfully defending his title in the race.

Still racing off the rail, Lone Rock maintained a clear edge leaving the far turn with an opening along the rail that Hosier took advantage of to draw close only to see Lone Rock spurt away again and widen his advantage to the wire.

Tenfold was fourth and was followed by Celerity.

Racing continues Wednesday with a 10-race program beginning at 12:45 p.m. (all times Eastern) and features two stakes: the seventh running of the $200,000 William Walker (Listed) for 3-year-olds going 5 ½ furlongs on the renovated Matt Winn Turf Course and the inaugural running of the $160,000 St. Matthews Overnight Stakes for 4-year-olds and up going six furlongs on the main track.

Ramon Vasquez (Jockey, Lone Rock, winner) – “I thought I would be laying second with him, but nobody wanted to go to the front. He was comfortable and running easily so I just took the lead and let him do this thing. He was comfortable all the way. This horse is fun to ride. He does everything so easily. “

Robertino Diodoro (Trainer, Lone Rock, winner) – “[Marathon horses] are getting fewer and further in between. I can’t say enough about this horse. He’s been amazing. Ramon did a great job — it’s not easy riding in a five-horse field and I think he did great to take charge to the lead. I love the way he broke today.”

Flavien Prat (Jockey, Hosier, second) – “I had a good trip. He gave a good try. The winner was too good.” 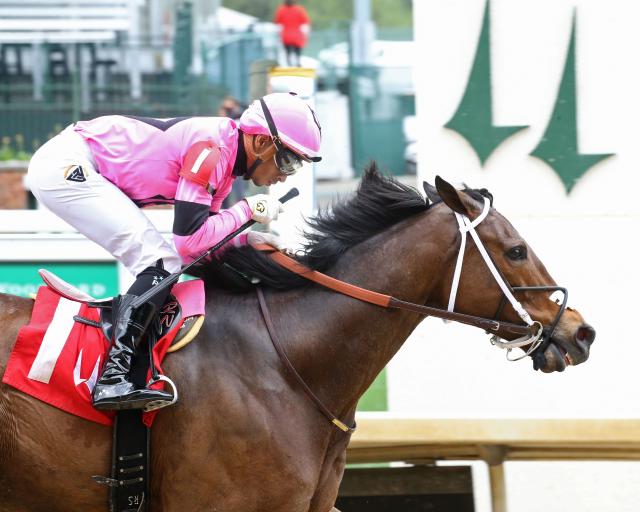