Live Oak Plantation’s 4-year-old gelding March to the Arch surged past 71-1 longshot All Right in the final yards to win Saturday night’s 30th running of the $250,000 Wise Dan (Grade II) at Churchill Downs by a neck. Admission Office, the 2-1 favorite in the field of 13 older horses, was another neck back in third while 33-1 outsider Parlor finished another head back in fourth.

Ridden by Tyler Gaffalione and trained by Mark Casse, March to the Arch ran 1 1/16 miles over firm turf in 1:40.58 to collect his third stakes win and first against Grade II company.

March to the Arch was covered up along the hedge in mid-pack during the early stages of the race as Siem Riep led the field through swift fractions of :23.34, :46.88 and 1:10.70. All Right grabbed the lead from Siem Riep with a furlong to run as March to the Arch sliced his way through traffic to get in the clear from the outside. He closed with a rush to just get his neck in front at the finish line.

March to the Arch returned $23, $12 and $6.80 at odds of 10-1. All Right, ridden by Adam Beschizza, returned $61.60 and $16.40. Admission Office paid $3.20 to show. Parlor was fourth and was followed by First Premio, El Picaro (Chi), Hot Springs, Bourbon Resolution, Cullum Road, Get Western, Siem Riep, Holiday Stone and Itsinthepost (FR). Noble Commander and Inspector Lynley were scratched.

March to the Arch, a son of Arch out of the Black Sam Bellamy (IRE) mare Daveron (GER), was bred in Florida by her owner Charlotte Weber.

Tyler Gaffalione, jockey of MARCH TO THE ARCH (winner): “The race set up beautifully. The speed went ahead and I was able to tuck in going into the first turn. So, we were saving ground all around and I kind of just followed Corey (on Parlor) when he started making his move. When I got him outside, he really exploded. He just kicked it into gear.”

David Carroll, assistant trainer of MARCH TO THE ARCH (winner): “It was just a super ride by Tyler. He saved ground all the way around, swung him out and he kicked hard. What a race. IT was only his third start of the year. He ran at Tampa and got beat only five lengths to Bricks and Mortar. Hopefully he’ll have a big year going forward. Not only is Tyler a tremendous rider, he’s a tremendous person. He’s very mature and it shows every time he rides for us.”

John Ortiz, trainer of ALL RIGHT (runner-up): “I had tears in my eyes cheering so loudly that I thought we won. I’m so incredibly proud of this horse. We were so close and he ran such a phenomenal effort.”

Joel Rosario, jockey of ADMISSION OFFICE (third): “We were pretty far back but we were closing fast. We just didn’t get there in time. He ran a good race and had a strong turn of foot.” 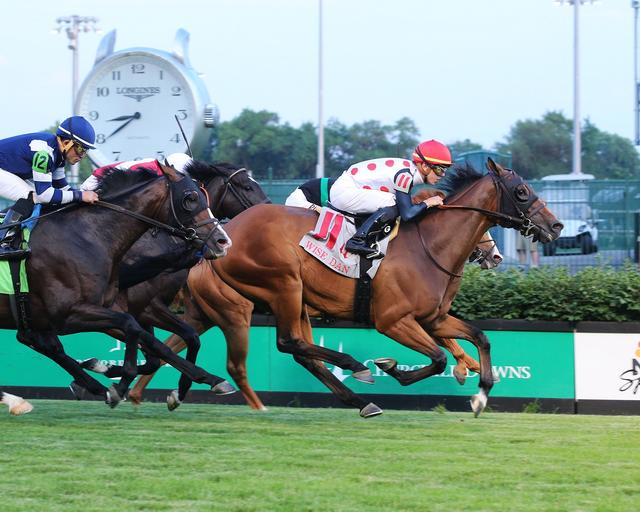