Mia Mischief Holds Off Marley's Freedom to Win Humana DistaffLOUISVILLE, KY (Saturday, May 4, 2019) – William and Corinne Heiligbrodt, Heider Family Stables and Madaket Stables Mia Mischief swept past pace-setting Amy’s Challenge in mid-stretch and then held off a late bid from favored Marley’s Freedom to score a 1 ¾-length victory in the 33rd running of the $500,000 Humana Distaff (GI) for fillies and mares, the first of seven graded stakes on Kentucky Derby Day.

Amy’s Challenge led the field of seven through fractions of :22.70 and :45.02 with Mia Mischief in closest pursuit. At the head of the stretch, Mia Mischief drew on even terms with Amy’s Challenge and slowed opened a daylight advantage that was too much for Marley’s Freedom to overcome.

Mia Mischief, a 4-year-old Kentucky-bred daughter of Into Mischief out of the Speightstownmare Greer Lynn, notched her first Grade I victory and second graded score having won the Eight Belles (GII) here last year on May 4.

It was another length back to Spiced Perfection who was followed in order by Emboldened,Spring in the Wind and Talk Veuve to Me.

Ricardo Santana Jr. (rider of Mia Mischief, winner) – “She responded really well today. I sat off of the speed and just waited.”

Steve Asmussen (trainer of Mia Mischief, winner) – “I think the filly looks great right now. She’s doing really well and this was our first major target of the year with her. And she came through. It means so much (getting a Grade I) with a filly who tries as hard as she does, as tough a race as she gave us last year. We felt really good about how she was coming into this race, how she was doing, knowing she’s run so well over this racetrack.”

(On winning for the Heiligbrodts) -- “The Heiligbrodt family, I’ve won over a 1,000 different races for them and then for them to have a Grade 1 caliber filly right now is very special.”

(Happy with the race set up) -- “She was very sharp today and not enough can be said about how well Ricardo (Santana) has done with her. She’s a very headstrong, not easy filly and she’s definitely listening to him right now and responding.”

Bill Heiligbrodt (owner of Mia Mischief, winner) – “Grade 1s are tough but the mare is that quality mare. She’s my kind of horse. Go fast and get to the front.”

Mike Smith (rider of Marley’s Freedom, runner-up) – “It's not her favorite track. She doesn't get ahold of it very well. Maybe we were just wishful thinking today. Same track. Same mare. She ran well, but that's just because she's classy. She doesn't like it, though."

Bob Baffert (trainer of Marley’s Freedom, runner-up) – "I was hoping (Marley's Freedom) would be a little bit closer. When I saw the fractions, I thought she was a little bit too far back. I'm not sure if she struggles here or what. I was hoping to be near the pace within a length or two."

Alex Canchari (rider of Amy’s Challenge, third) – “She ran good. It was a tough race with a tough field. The track was a little tiring today, I think it’s been favoring horses coming from off of it, not really favoring speed. My filly ran her race.”

Javier Castellano (rider of Spiced Perfection, fourth) – “She was off the pace. There was a lot of speed in the race. She sat right behind the horses, but when I asked her, she just didn’t have it today.” 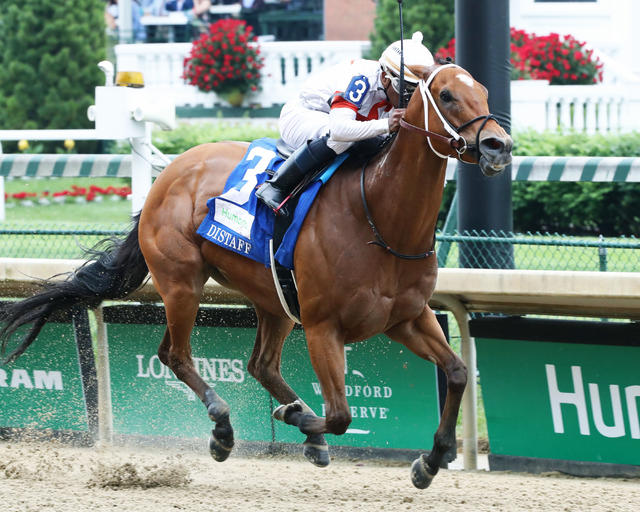