The Mighty Beau, carded as Race 9 at approximately 10:11 p.m. (all times Eastern), is the first of two stakes events on Churchill Downs’ Downs After Dark Presented by Budweiser 11-race program. The card also features the 31st running of the $125,000 Aristides in Race 10 with a post time of 10:42 p.m. First race is 6 p.m.

Trained by Rusty Arnold, Morticia was narrowly defeated by A Little Bit Me in the $125,000 Unbridled Sidney on May 2 prior to entering the Mighty Beau. The 5-year-old Twirling Candy mare sports a stout record of 21-8-6-4 with earnings of $617,325.

Morticia, who has only finished worse than fourth once in her career, will be ridden by Stewart Elliott from post No. 6.

Chief among the competition to Morticia in the Mighty Beau is Autumn Hill Farms Racing Stables’ Churchill Downs Stakes (GI) runner-up Bobby’s Wicked One, who will try the turf for the first time in his 12-race career for trainer Al Stall Jr. Bobby’s Wicked One (11-4-4-1—$412,080), who will be ridden by Miguel Mena out of post 10, has three victories in 2019 including a 1 ¼-length score in the Commonwealth Stakes (GIII) at Keeneland.

Another top competitor in the Mighty Beau is DAARS, Inc.’s Jacques Cartier Stakes (GIII) runner-up Extravagant Kid. Trained by Brendan Walsh, Extravagant Kid (33-9-9-6—$496,367) has not finished off the board since June 18, 2018 with a fifth-place effort in the Karl Boyes Memorial Stakes at Presque Isle Downs. Since that race, Extravagant Kid was victorious in the Aug. 31 Lucky Coin Stakes at Saratoga and the March 31 Zaxby’s Sprint Stakes at Tampa Bay Downs.

Tyler Gaffalione has the call on Extravagant Kid who drew post 5. 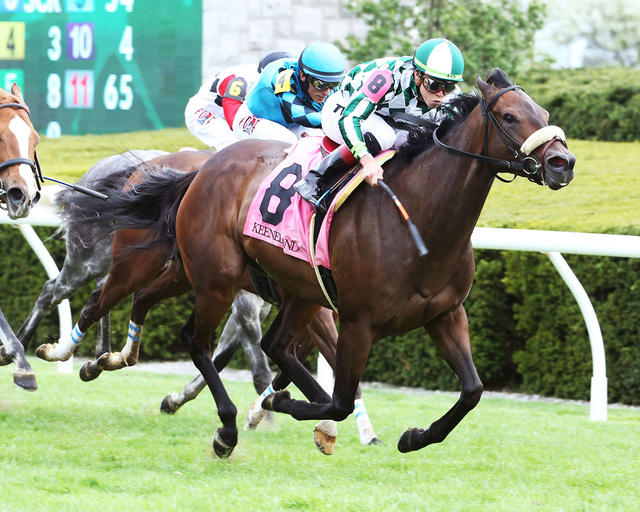