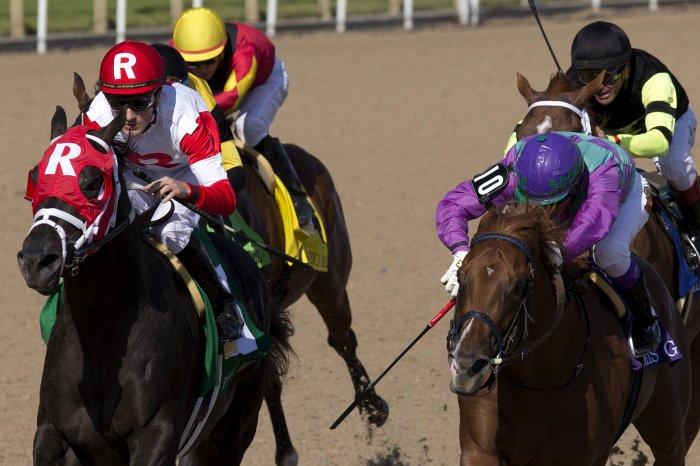 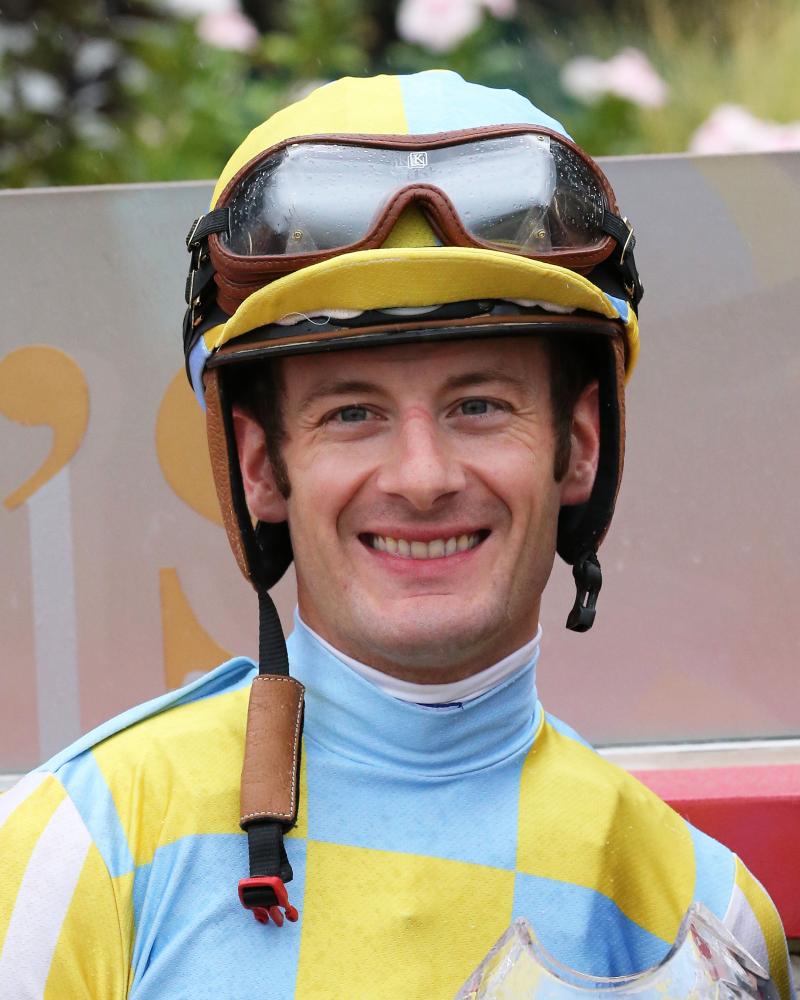 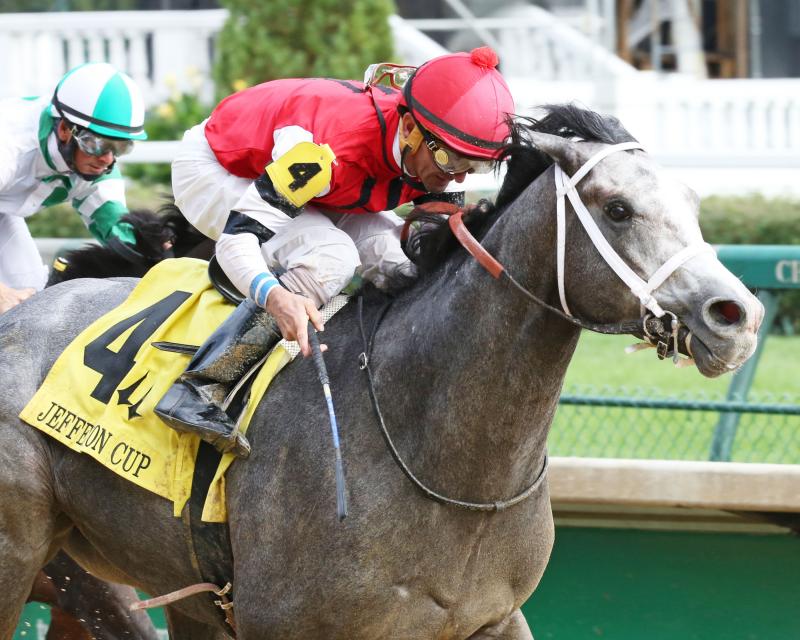 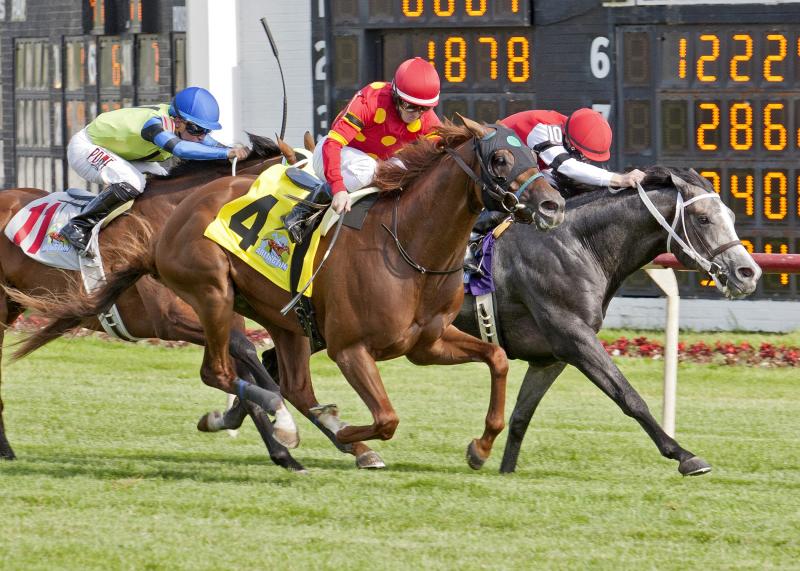 Ken and Sarah Ramsey’s Sir Dudley Digges, winner of Canada’s Queens Plate, is back in the United States and is set to face 10 rival 3-year-olds in Saturday’s 13th running of the $100,000 Commonwealth Turf (Grade III) over the Matt Winn Turf Course at Churchill Downs Racetrack.

The Mike Maker-trained son of Gio Ponti will break from post two under jockey Julien Leparoux in the 1 1/16-mile turf test that is scheduled as the 10th event on an 11-race program at the Louisville track. Post time for Saturday’s first race is 1 p.m. (all times EST) and the field for the Commonwealth Turf is set break from the starting gate at 5:30 p.m.

The Ontario-bred Sir Dudley Digges will be the first Queen’s Plate winner to compete at Churchill Downs since 2009 winner Eye of the Leopard finished sixth in the 2010 running of the Kelly’s Landing Stakes. Wild Desert, the Queen’s Plate winner in 2005, was later the runner-up in Churchill Downs’ 2006 running of the Alysheba, which was then a listed race but is now a Grade III test.

The victory by Sir Dudley Digges in the July 3 race for Canadian-bred 3-year-olds was his second win of the year. He collected his first career triumph in his seventh career start in an April maiden race at Keeneland and ran third to Amis Gizmo in Woodbine’s Plate Trial before his 15-1 Queen’s Plate breakthrough over the synthetic Tapeta surface. Sir Dudley Digges followed that victory with a dull sixth-place run over dirt, again behind Amis Gizmo, in the Prince of Wales at Fort Erie before he returned to Woodbine for a runner-up finish to longshot Camp Creek on turf in the Breeders’ Stakes, the final jewel of Canada’s Triple Crown.

Sir Dudley Digges will attempt to improve on his career record of 2-4-3 in 11 races and total earnings of $623,429. He will bid to provide his owners and trainer with their first victory in the Commonwealth Turf. Leparoux won the race in 2014 aboard Heart to Heart.

Surgical Strike enters the Commonwealth Turf off a solid runner-up finish behind Giant Run in the $200,000 Centaur Stakes at Indiana Grand. The Ben Colebrook-trained son of Red Giant earlier won the Arlington Classic (GIII) over yielding turf at Chicago’s Arlington Park and the John Battaglia Memorial over the synthetic Polytrack surface at Turfway Park. He finished third in both the American Turf (GIII) at Churchill Downs and Turfway’s Spiral (GIII).

Jose Valdivia Jr. will be in the saddle aboard Surgical Strike for the first time as the colt sees to improve on his career record of 3-2-3 in 14 races and earnings of $384,605. Colebrook’s star drew post five and will carry high weight of 123 pounds.

Casse’s trio includes two 3-year-olds that won their most recent starts and a third that is seeking his first win in the U.S.

Blackout (FR) won two of seven races in England before moving to Casse’s stable in late summer. He rallied from seventh to win an Oct. 14 allowance race on the Belmont Park turf and will have the riding services of French-born Florent Geroux when he makes his Churchill Downs debut on Saturday. The son of Dream Ahead will break from post three under 120 pounds, where he won three of seven races.

Tizzarunner, a 3-year-old son of Tizway, launched his career for the Casse stable in Canada, but his five 2016 races have all come at U.S. tracks. He surged from seventh to win a 1 1/8-mile allowance on the Keeneland grass last time out for his first win of the year and improved his career record to 2-4-3 in 10 races with earnings of $148,241. Chris Landeros will ride Tizzarunner, who breaks from post 10 and was assigned 118 pounds

Ikerrin Road (IRE) also launched his career in England, where he won three of seven races on grass before moving to the U.S. The son of Iffraaj (GB) finished fifth as the favorite in a 5 ½-furlong allowance race over the Keeneland turf on Oct. 16. Ricardo Santana Jr. will ride Ikerrin Road (IRE), who drew post nine and will carry 118 pounds when he seeks his first stateside win.

Other contenders in the Commonwealth Turf include One Mean Man and Zapperini, the 1-2 finishers Churchill Downs’ Oct. 1 Jefferson Cup, which was scheduled for turf but moved to the main track for its 2016 renewal.

LTB Inc. and Ron Hillerich Racing Inc.’s One Mean Man earned his third stakes victory of the year in the Jefferson Cup. He had earlier taken the American Derby (GIII) on the grass Arlington Park and the Mystic Lake Derby on turf at Minnesota’s Canterbury Park. He earlier finished a head behind Commonwealth Turf rival Surgical Strike as the runner-up in the Arlington Classic. Robby Albarado will ride One Mean Man, who will shoulder co-high weight at 123 pounds, from gate seven.

The runner-up finish in the Jefferson Cup by Lloyd Madison Farms IV LLC’s Zapperini was the most recent outing for the 3-year-old son of Ghostzapper. His two races prior to his run over dirt in the Jefferson Cup included a close third to Giant Run and Surgical Strike in the Centaur and an allowance victory in his debut on grass at Ellis Park. The Greg Foley-trained Zapperini has a career record of 2-2-1 in nine races and earnings of $112,165. He will be ridden in the Commonwealth Turf by Corey Lanerie at 118 pounds and has drawn post eight.

Another possible contender with strong local ties is Whitham Throughbreds LLC’s Bondurant, a son of War Front who scored a sharp victory in a one-mile allowance race on the Keeneland turf on Oct. 13. The stretch-running colt has won three of five career races and brings career earnings of $111,926 into his stakes debut in the Commonwealth Turf. Bondurant is a half-brother to Whitham’s McCraken, a promising 2-year-old and winner of the recent Street Sense Overnight Stakes at Churchill Downs. The Ian Wilkes-trainee will be ridden by Brian Hernandez Jr. from post eight under an impost of 118 pounds. 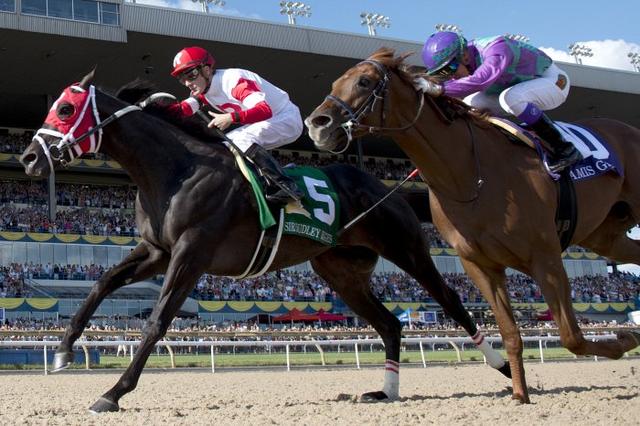