WinStar Farm, China Horse Club International and SF Racing’s Oaklawn Handicap (Grade II) winner Quip is at Keeneland preparing for a start in the $600,000 Stephen Foster presented by GE Appliances (GII) on June 15, and trainer Rodolphe Brisset believes the son of Distorted Humor could be on track for a strong 4-year-old campaign.

“Since we gave him six months off after the Preakness, he’s really changed and matured,” Brisset said. “We really had to crank on him last year to get him ready for the Triple Crown races but once we backed off him, you could really tell a difference. We got him back and he’s grown and become a new horse. I think we could set ourselves up for a big second half of the year leading into the Breeders’ Cup Classic (GI). The older horse division is pretty wide open and hopefully we can stamp ourselves as one of the top horses.”

Quip’s 2019 campaign began with a third-place effort in the Feb. 23 Hal’s Hope (GIII) at Gulfstream prior to besting Lone Sailor by a neck in the April 13 Oaklawn Handicap. The bay colt has recorded four workouts since including a five-furlong move in 1:02.20 on Monday.

“It may look like a slow time on paper but he kept galloping out,” Brisset said. “We timed him galloping out six furlongs in 1:13. If everything keeps going well, we will probably work him the Sunday after the Belmont Stakes (June 9) and send him to Churchill Monday afternoon to begin preparing for the race.”

Nominations for the Stephen Foster – a “Win and You’re In” race for the Breeders’ Cup Classic – close Saturday, June 1. Other known horses targeting the 1 1/8-mile race include Seeking the Soul and Yoshida (JPN).

Romans, 52, continued to map out future race plans for his stable stars including multiple graded stakes winner Promises Fulfilled and Preakness (GII) runner-up Everfast. Promises Fulfilled, who won the Allen Jerkens Stakes (GI) last summer at Saratoga, is on target for the $1.2 million Metropolitan Handicap (GI) while Everfast remains on schedule for the $1.5 million Belmont Stakes (GI). Both races will be run June 8 at Belmont Park.

“Promises Fulfilled is one of the fastest horses in the country,” Romans said. “The Met Mile is turning out to be one heck of a race and I think we fit right with the rest of them that are heading there.”

Owned by Bob Barron, Promises Fulfilled clipped through a five-furlong bullet work in :58.80 Friday morning through opening fractions of :11.60, :23 and :46.80 before galloping out six furlongs in 1:12.20, according to Churchill Downs’ clocker John Nichols.

“I decided to put Robby (Albarado) on him for this breeze,” Romans said. “Usually I work all my horses with exercise riders but I wanted a quicker work out of him and we got just what we needed.”

Calumet Farms’ Everfast is a horse Romans dubbed as a “potential star” after he reversed his form in the Preakness. The son of Take Charge Indy had previously finished fifth in the Pat Day Mile presented by LG&E and KU (GIII) and ninth in the Florida Derby (GI).

“He really surprised a lot of us in a good way after running so well in the Preakness,” Romans said. “We’ll see what lies ahead of him the rest of the 3-year-old campaign.”

Romans, winless in his first 28 starts of the meet, remains 11 wins ahead of Bill Mott in the all-time standings 724-713. Hall of Fame trainer Steve Asmussen, who began Friday atop the trainer standings with 10 wins, continues to close ground with 686 career victories beneath the Twin Spires.

Trained by Rusty Arnold, Awestruck battled on a contested lead in a six-furlong allowance May 3 at Churchill Downs to prevail over fellow Winning Colors competitor Upset Brewing. Awestruck primarily has been based with Arnold’s Keeneland string but sports a 6-2-2-0 record beneath the Twin Spires.

The 5-year-old daughter of Tapit will be joined in the starting gate by stablemate Annathela, who is slated to return from a six-month layoff after finishing fourth in the Mahoning Distaff.

“She looks pretty solid on paper,” said jockey James Graham, who was named on Annathela for the first time in her 21-race career. “We should sit pretty close to the pace.”

The six-furlong Winning Colors, which honors the Hall of Fame filly that prevailed against colts in the 1988 Kentucky Derby, is an annual Memorial Day weekend fixture and one of two stakes events on Saturday’s 11-race program. Churchill Downs’ first race is 12:45 p.m. (all times Eastern). The Winning Colors goes as Race 10 at approximately 5:26 p.m. and the seventh running of the $100,000 Keertana Overnight Stakes, a 1 ½-mile grass marathon for fillies and mares, is the fourth race at approximately 2:13 p.m.

Churchill Downs admission gates will open Saturday at 11:30 a.m. General Admission is $5, reserved seating is $12 and reserved dining packages are $39. Tickets can be purchased in advance online at ChurchillDowns.com/Tickets.

LANDEROS, WILKES ATTEMPT THIRD-STRAIGHT VICTORY FOR GENTLE RULER IN KEERTANA – Morsches Stable’s Gentle Ruler will attempt to land her third-straight victory as she tests stakes company for the first time in Saturday’s seventh running of the $100,000 Keertana Overnight Stakes for fillies and mares at 1 ½ miles on the Matt Winn Turf Course.

“She really jumped up in her last start after running 1 ½ miles on turf,” jockey Chris Landeros said. “I think she can definitely excel the longer she goes. Hopefully we can track from just off the pace in a shorter field (in the Keertana).”

Trained by Ian Wilkes, Gentle Ruler took 11 tries until she broke her maiden on March 28 at Gulfstream Park over a “sloppy” surface. The 4-year-old daughter of Colonel John has been based with Wilkes’ string at the Skylight Training Facility located in nearby Goshen, Ky.

“Skylight is a very quiet place to train,” Wilkes said. “Some horses really thrive being based out there instead of the hustle and bustle of the racetrack.”

Gentle Ruler will break from post position No. 6 and is listed at 8-1 on the morning line.

The Keertana, carded as Race 4 at approximately 2:13 p.m. (all times Eastern), is the first of two stakes events on Churchill

DOWN THE STRETCH – There was a massive $295,049 carryover in the 20-cent Single 6 Jackpot Friday in Races 4-9. There also is a $9,707 carryover in the $1 Super Hi-5 in Race 9. … In celebration of Memorial Day on Monday, all active and retired members of the United States armed forces will be admitted free of charge. Also, Churchill Downs’ bugler Steve Buttleman will perform patriotic melodies following the “Call to the Post” for each race. … “Inside Churchill Downs” will air Friday at 6 p.m. on ESPN 680/105.7. The one-hour horse racing radio show is co-hosted by Churchill Downs Racetrack’s Darren Rogers and Kevin Kerstein and delivers a wide-ranging list of interesting guests, from jockeys, trainers, owners to well-informed handicappers and other industry insiders. Those outside the Louisville radio market can listen live online at http://www.espnlouisville.com/ or via podcast on the station’s website or https://soundcloud.com/. 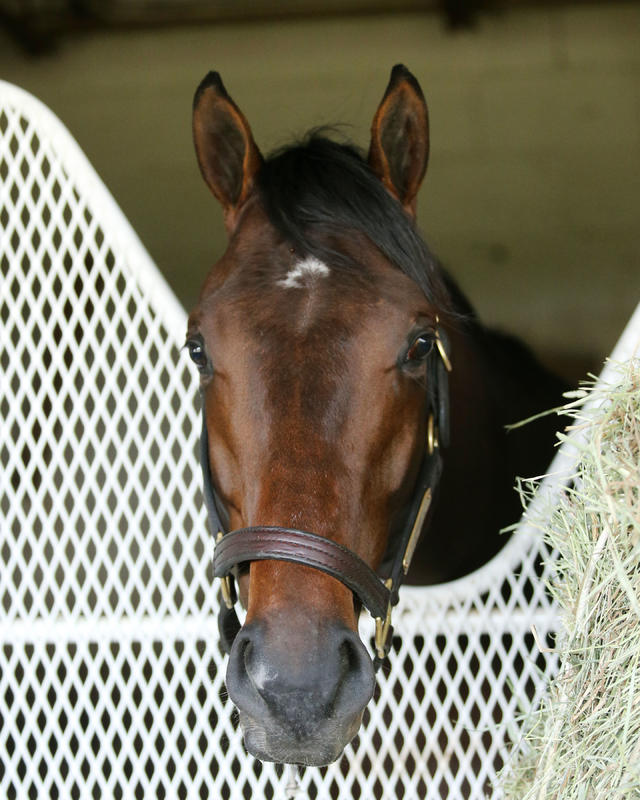