“I just wanted them to stretch their legs,” McCarthy said. “Conditions were not ideal weather wise but I knew they would do a good job with the track. I was more than pleased with the works.”

Slam Dunk Racing’s Axelrod comes into the Classic off a runner-up finish to Classic rival McKinzie in the Pennsylvania Derby (GI). Jose Ortiz was aboard for the work Saturday with Joe Bravo having the call for the Classic.

Axelrod has produced a record of 4-2-2-0 since venturing into graded-stakes company.

“The Indiana Derby (GIII) was his breakthrough,” McCarthy said, tracing the colt’s improvement to maturity. “He has a lot of confidence now and thinks he can do anything. It was no disgrace losing to McKinzie, who is probably the best 3-year-old still running.”

Tyler Gaffalione was aboard Eclipse Thoroughbred Partners and Mr. and Mrs. Jim Daniell’s Vibrance, who finished second to Bellefina in the Chandelier (GI) in her most recent start. John Velazquez will have the Breeders’ Cup mount.

City of Light also was pre-entered in the Classic but McCarthy said, “Barring anything crazy happening this week, he will go in the Dirt Mile. I will be very excited to lead him over there.”

City of Light would go at 7:30 during the special training period for Breeders’ Cup horses if conditions permit with Paved and Liam the Charmer going on the turf at 9:45. “That’s the plan now,” McCarthy said. “We’ll see what it looks like in the morning.”

Breezing with jockey Brian Hernandez Jr. in the saddle, Signalman began his work one length behind stablemate Math Major (four furlongs in :48) through opening splits of :11.60 and :23, before finishing one length in front on the five-furlong gallop out in 1:01 and completing six furlongs in 1:15.

The massive son of General Quarters, who stands at least 17 hands tall, according to trainer Kenny McPeek, broke his maiden Sept. 1 at Saratoga prior to his runner-up effort behind fellow Juvenile contender Knicks Go in the Breeders’ Futurity.

“I liked it; she did it pretty easy,” said Julie Clark, assistant to trainer Keith Desormeaux. “Jose liked her last week too (a half-mile in :48.40). He said she does it so easy and feels like there is another gear there.”

Ortiz will have the mount for the $2 million Tito’s Handmade Vodka Breeders’ Cup Juvenile Fillies (GI) on Friday on Reflect who was second to Restless Rider in the Oct. 5 Alcibiades (GI) at Keeneland.

ADDITIONAL BREEDERS’ CUP NEWS AND NOTES – Trainer Tom Amoss said Saturday morning that G M B Racing’s Lone Sailor would be entered in the $6 million Breeders’ Cup Classic (GI). Winner of the Oklahoma Derby (GIII) in his most recent start, Lone Sailor was pre-entered in the Classic as well as the Breeders’ Cup Dirt Mile (GI) but Amoss said the determining factor was the pace setup for the Classic. James Graham, who has ridden Lone Sailor five times including the Oklahoma Derby victory, will have the mount in the Classic. … There were 22 European Breeders’ Cup contenders that arrived at approximately 1:30 a.m. Saturday at Churchill Downs including superstar filly Enable and top older horse Roaring Lion. … Breeders’ Cup Classic contender Gunnevera is expected to arrive Saturday at Churchill Downs via van from Florida, according to Churchill Downs Director of the Stable Area Steve Hargrave. … Kaleem Shah’s Bellafina, the likely favorite for Friday’s $2 million Tito’s Handmade Vodka Juvenile Fillies (GI), jogged over the sloppy main track a day after arriving from her Southern California base. Trainer Simon Callaghan was on hand for the morning exercise and is here through the Breeders’ Cup. ... Turf training will begin Sunday at 9:45 a.m. for horses that are pre-entered in Breeders’ Cup races. The main track, which opens at 5:15 a.m., will close at approximately 9:35 a.m. Turf training will continue through Friday. … Assistant Racing Secretary and Stakes Coordinator Dan Bork reported Breeders’ Cup Juvenile contender Trophy Chaser is expected to enter in the $100,000 Street Sense on Friday, Nov. 2 and bypass the championship race. If Trophy Chaser does not enter the Breeders’ Cup Juvenile, it would place Calumet Farm’s maiden Derby Date into the body of the field for Hall of Fame trainer D. Wayne Lukas who worked a half-mile in :48.20 Saturday morning at Churchill Downs. 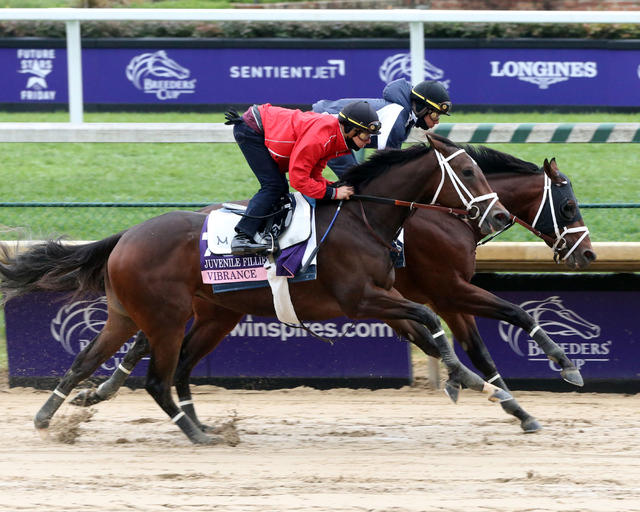