Trained by Jimmy Jerkens and ridden by Joel Rosario, Rocketry was relegated to last through the opening stages of the race while the Bob Baffert-trained Dabster led for 1 ½ miles under jockey Joe Talamo. Rocketry began his charge following Dabster’s one mile in 1:41.72 while rallying three wide on the final turn. Rocketry passed Dabster inside the eighth pole to win by a final margin of three-quarters of a length.

“We had a great trip even with how long the race was,” Rosario said. “This horse tries so hard every time and it says a lot about a horse’s ability when they continue to try hard after running that distance.”

Honorable Duty, who was sent off as the 4-1 third choice, was pulled up after 1 ½ miles by jockey Jose Ortiz.

“I think he was just getting tired and stumbled a little bit,” Ortiz said. “I jumped off of him as a precaution but he appeared to be sound. I just wanted to be safe.”

The Marathon Stakes was Rocketry’s fifth-career victory through 15 starts. The 4-year-old Hard Spun colt earned $120,280 for his win, which boosted his career earnings to $497,370.

Breeders’ Cup Saturday gets underway at 10:45 a.m. (all times Eastern) beneath the historic Twin Spires. The Breeders’ Cup Classic (GI) has a post time of 5:44 p.m.

Joel Rosario, jockey of ROCKETRY (winner): “We had a great trip even with how long the race was. This horse tries so hard every time and it says a lot about a horse’s ability when they continue to try hard after running that distance.”

Jimmy Jerkens, trainer of ROCKETRY (winner): “I think that’s the end of his turf days. This horse tries so hard every single time he runs. It speaks volumes to these marathon horses who try so hard. We’re thrilled with his win.”

Chris Landeros, jockey of BIG DOLLAR BILL (third): “We were closing in late but just couldn’t catch the leaders. This horse is really nice and gives it his all every time he runs. 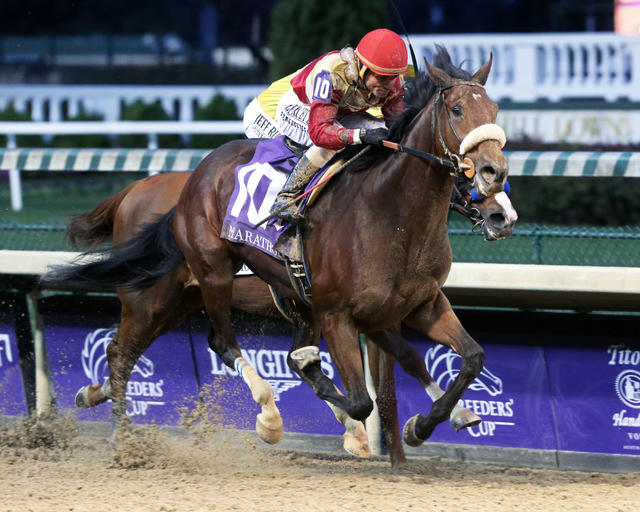