On Saturday, trainer Brad Cox’s barn worked five of their nine probable runners in this year’s Breeders’ Cup. Most notably taking to the track was superstar mare Monomoy Girl. The likely favorite in the $2 million Longines Breeders’ Cup Distaff (GI) worked with her regular pilot Florent Geroux aboard and started about one length behind stablemate Owendale. Owned by Michael Dubb, Monomoy Stables, The Elkstone Group, and Bethlehem Stables, Monomoy Girl swiftly worked through eighth-mile splits of :12, :24.40, :36.20, :47.80 and 1:00. Monomoy Girl galloped out in front of Owendale through seven furlongs in 1:26.40, according to Churchill Downs clocker John Nichols. Owendale completed his six-furlong move one second slower than Monomoy Girl in 1:13.

“Anyone you put with Monomoy, she seems to always out work them,” Geroux said. “She’s worked with a lot of really good horses in the past and Owendale is a really good horse. She just always gets the better of them.”

“There’s not much really to say about her other than she’s just really, really, really good right now,” Cox added. “We’ll see what the future holds for her but as a 5-year-old she’s showing how mature she’s become.”

Cox’s morning started at 5:30 a.m. when Donegal Racing, Joseph Bulger and Peter Coneway’s $2.4 million earner Arklow worked outside of stablemate Plainsman through splits of :12.60, :24.80 and :47.80. Plainsman completed five furlongs in :59.80. Arklow, who was ridden by Geroux, continued to gallop out around the clubhouse turn in front with a six-furlong gallop out in 1:11.80. The $4 million Breeders’ Cup Turf (GI) will mark Arklow’s 30th career start but only the second with the addition of blinkers.

“I wish I would’ve added the blinkers in start 19 instead of 29,” Cox joked. “He’s really turned the corner since we put them on for the Kentucky Turf Cup Classic (GIII) last out. This year has been interesting with this horse. He ran a good race in June (in the $100,000 Louisville) and we ran him back in the Elkhorn where he didn’t run bad but I had the not-so-great idea of sticking him on a plane and running six days later at Monmouth (in the Grade I, $315,000 United Nations). After he finished fourth that day, I said we have to make a change and add blinkers. It really worked out in the Kentucky Turf Cup, which in and of itself turned out to be a really interesting race when there was a torrential downpour before the running of the race.”

Immediately following Arklow’s move, Cox worked Korea Racing Authority’s four-time winner Knicks Go, who recently cruised to a 10 ¼-length score at Keeneland in a conditioned allowance event. The gray son of Paynter worked solo through early fractions of :24.40 and :48 with a six-furlong gallop out of 1:12.80.

“This horse has really come around,” Cox said. “I hope we can get into the Dirt Mile because I think he will really like two-turns and have a pace advantage with his stamina.”

In Cox’s next set he worked Gaining Ground Racing’s 12-time winner Factor This, who easily breezed through splits of :13, :25.40 and :49.20. The recent winner of the $250,000 Dinner Party (GII) worked outside of stablemate Gold Standard.

The fastest recorded five-furlong move of the morning came from Allied Racing Stable’s $6 million Breeders’ Cup Classic (GI) contender By My Standards when he whipped through fractions of :12, :23.40 and :34.80 with jockey Gabriel Saez aboard. The duo galloped out six furlongs in 1:11 and completed seven furlongs in 1:24.80.

“Last week was the first work we did a little bit something serious with him (since he won the Alysheba),” Calhoun said. “He was full of energy and bounced around great after it. It’s been a different year for sure losing a few races here or there. We were fortunate to have (the Alysheba) on the undercard of the rescheduled Derby. We probably could’ve shipped somewhere around the country but our goal was how to get him to the Breeders’ Cup Classic. We decided to stay here run in the Alysheba and point to the Breeders’ Cup from there.

“Some really good horses look like they’re coming together (for the Classic) and horses that have beaten us. Tom’s d’Etat beat us (at Churchill in the Stephen Foster). I have a ton of respect for him. Maximum Security hasn’t done anything wrong in his career. It’s a top group of horses that we’ll have to turn the tables on them. … I think By My Standards has been very consistent this year and has gotten better as the months have gone on.”

The aforementioned Tom’s d’Etat, who has been off since his troubled third-place effort in the $750,000 Whitney (GI) in early August, continued his serious preparation for the Classic with a solid six-furlong move under jockey Miguel Mena. The duo worked with stablemate Oak Hill. Tom’s d’Etat, owned by G M B Racing, worked through splits of :12.20, :23.80, :47.20 and 1:00. Oak Hill completed five furlongs in 1:01.

“The schedule with the pandemic got a little awkward with everyone,” Stall said. “The races didn’t quite work out in the calendar quite right for him. My gut feeling said to go into the Classic fresh anyway and when the last round of stakes races came out I didn’t like the way they were placed so we stuck with the plan to train up to the race.”

Just before Tom’s d’Etat worked, a trio of horses from the Kenny McPeek barn worked solo for the Breeders’ Cup. Among them was recent $1 million Preakness Stakes (GI) heroine Swiss Skydiver. With Robby Albarado in the saddle, the classy 3-year-old filly breezed through fractions of :12.40 and :24.40.

“She was pulling today and feeling really good with the cool weather,” Albarado said. “No complaints, she feels amazing. … I’m going to gallop her the last five days before the race as I did at Pimlico. We’re going to see how she’s doing and make a decision (about the Classic or Distaff) from there.”

Starting on Friday at Churchill Downs, there will be a special training period for Breeders’ Cup contenders from 7:30-7:45 a.m. The special training session is scheduled to run through Wednesday, Nov. 4.

COACH HOPING TO STRETCH STAMINA TO TWO-TURNS IN SUNDAY’S RAGS TO RICHES – Kueber Racing’s undefeated 2-year-old filly Coach will attempt to stretch out in distance for the first time as the 3-1 morning line choice in Sunday’s $98,000-added Rags to Riches at Churchill Downs.

“We’ll see if she handles the stretch out like her pedigree says she will,” trainer Brad Cox said. “She’s by Commissioner so I think she’ll like it. She really didn’t show a lot of speed in the morning training so we weren’t sure what to expect in her debut. She ended up winning impressively first out at Indiana and was just as impressive, if not more, in her next start. Her numbers came back really good for both races so I think this is a good next step for her.”

The 1 1/16-mile Rags to Riches is the co-headlining race of the 11-race kick off of the 24-day Fall Meet. The Rags to Riches shares the spotlight with the $98,000-added Street Sense for colts and geldings. Dubbed as Stars of Tomorrow I, the afternoon will feature all 2-year-old racing. First post is 1 p.m. (all times Eastern).

Churchill Downs Racing to Air on FS1/FS2 – The racing action from Churchill Downs Racetrack throughout the Fall Meet will be broadcast on FOX Sports’ “America’s Day at the Races,” which will air every race day on either FS1 or FS2.

Produced by the New York Racing Association, Inc. (NYRA) in partnership with FOX Sports, “America’s Day at the Races” is the acclaimed national telecast presenting coverage and analysis of the best racing from around the country.

DOWN THE STRETCH – Churchill Downs will offer handicappers free Brisnet past performances each day. Horseplayers can visit www.churchilldowns.com/racing-handicapping/handicapping/expert-picks for complementary Brisnet past performances along with daily expert selections from Ed DeRosa, Joe Kristufek and Scott Shapiro of TwinSpires.com and several other handicapping tips including workouts of the day from expert clocker Bruno DeJulio. … Media who wish to cover the Fall Meet should email [email protected] and/or [email protected]. The barn area, saddling paddock and winner’s circle remains limited to essential personnel but minimal predetermined media members have been granted access. Media who comply with social distancing are permitted in the Grandstand, Clubhouse and outside the paddock area during morning training and afternoon racing. … For more information and to purchase tickets for the Fall Meet, visit www.churchilldowns.com 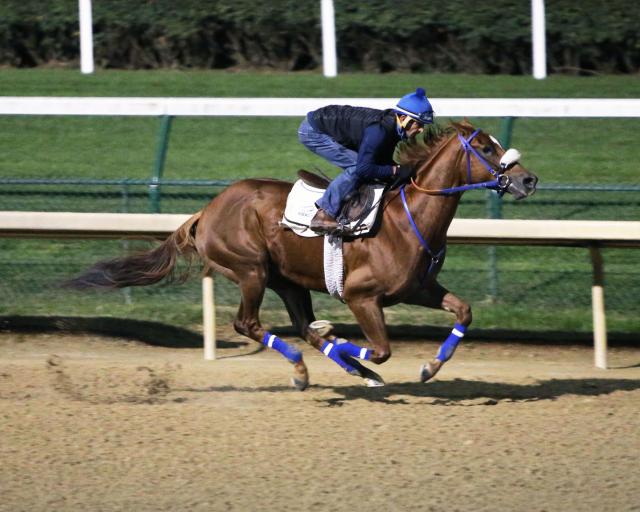