Secret Message edged La Signare (FR) by a head at the wire in a thrilling finish to Saturday’s 44th running of the $100,000 Old Forester Mint Julep (Grade III) at Churchill Downs. It was another neck back to Zofelle (IRE) in third with She’sonthewarpath another head back in fourth.

Juliet Foxtrot (GB), the 8-5 favorite in the full field of 14, contended for the lead with a furlong to run but finished sixth.

Secret Message, trained by Graham Motion and ridden by Hall of Famer John Velazquez, ran 1 1/16 miles on firm turf in 1:43.13.

“I was just sort of biding time there on the outside and she kept finding her stride down the lane and was able to get up late,” Velazquez said.

Mitchell Road, who broke from the outside post 14, dictated the pace through early fractions of :23.20, :48.27 and 1:13.14 with Juliet Foxtrot (GB) a length behind and Zofelle (IRE) just behind her down along the inside hedge. Secret Message, in the clear on the outside, and La Signare (IRE) to her inside were positioned in eighth and ninth, respectively, down the backstretch.

Juliet Foxtrot, who made her first start in 181 days since a third-place finish in the Grade I Matriarch, drew even with Mitchell Road leaving the final turn and the two matched strides down the homestretch. Zofelle (IRE) poked her head in front at the sixteenth pole but Secret Message and La Signare (FR) were hitting their best strides late. The eventual winner raced in the clear down the middle of the track while the hard-luck runner-up had to briefly check behind the fading pacesetters in the final yards before finding room late between horses.

“Both horses ran such a huge race,” said Brendan Walsh, trainer of both La Signare (FR) and Zofelle (IRE). “We ran second and third by a head. Those are really tough beats when you lose by that close of a margin but we are really proud of both of their efforts.”

This was the fourth win for Secret Message, who previously won last year’s Nassau (GII) and Dahlia and the 2018 Pucker Up (GIII). She was making her first start since a 10th place finish in the E.P. Taylor (GI) last October.

The $56,420 first prize jumped Secret Message’s earnings to $416,838 with a record of 6-2-0 in 15 starts. She is owned by the partnership of Madaket Stables LLC, Heider Family Stables LLC, ERJ Racing LLC, Elayne Stables and Steven Bouchey.

Secret Message is a daughter of Hat Trick (JPN) out of the Gone West mare Westside Singer and was bred in Kentucky by Allen Tennenbaum.

John Velazquez, jockey of SECRET MESSAGE (winner): “I was just sort of biding time there on the outside and she kept finding her stride down the lane and was able to get up late.”

Brendan Walsh, trainer of LA SIGNARE (runner-up), ZOFELLE (third): “Both horses ran such a huge race. We ran second and third by a head. Those are really tough beats when you lose by that close of a margin but we are really proud of both of their efforts.”

Steve Margolis, trainer of SHE’SONTHEWARPATH (fourth): “She didn’t have the best of trips at all in behind horses like that but still ran a huge effort. We were fourth by a length in a Grade III which could’ve been a Grade I with the type of horses that were in there.” 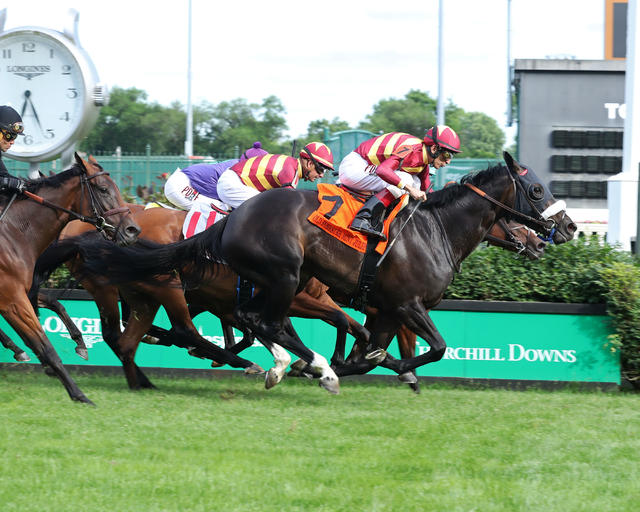