Along with the Stephen Foster and Fleur de Lis, the 11-race card offers three other graded stakes events for Thoroughbreds and a Grade I event for Arabians.

Below are the known probable entrants for the six stakes races, according to Churchill Downs assistant racing secretary and stakes coordinator Dan Bork (note: race order is tentative and subject to change):

Entries will be taken and post positions will be drawn Wednesday.

The Stephen Foster is the richest of six graded stakes races on Saturday’s special 11-race night racing card that begins at 6 p.m. Total purses on the evening total $1.93 million, which makes it the most lucrative racing day for horsemen at Churchill Downs outside of the Kentucky Derby and Kentucky Oaks programs.

Along with the spectacular racing program, the evening will feature a New Orleans-style theme with various street performers and a Jackson Square-style marketplace in the Plaza featuring local artists and Churchill Downs merchandise. The Plaza Stage entertainment will be the Dirty Dozen Brass Band – the popular New Orleans-based band that takes the foundation of brass band music and incorporates a blend of genres including Bebop Jazz, Funk and R&B/Soul.

Fans in attendance at Churchill Downs on Saturday will be able to take pictures with the engraved Kentucky Derby trophies just inside the Paddock Gate from 5-6:30 p.m.

Also, TVG will have live on-track updates throughout the night and Horse Racing Radio Network (HRRN) will air live coverage on SiriusXM 156 and online at HorseRacingRadio.net from 8-10 p.m.

GETTING TO KNOW TIM GLYSHAW – In the second part of a weekly series that will run Sundays in the month of June, we get to know jockeys and trainers in their life outside of the racetrack. Each week will feature a different jockey or trainer and today will feature trainer Tim Glyshaw.

Glyshaw has been training horses since 2004 after teaching middle and high school in Indiana. The native Hoosier is a passionate Indiana University sports fan. Glyshaw lives in the greater Louisville area and splits his time between Churchill Downs, Indiana Grand and Fair Grounds.

Q: When you go home, what is the first thing you watch on TV?

A: I usually have my TV set on ESPN.

Q: What radio station do you listen to in the car?

A: Most of the time I’ll have the radio set to SiriusXM’s Lithium channel. That was all the music I used to listen to in college.

Q: Have you ever cheered for University of Kentucky basketball?

A: No shot. I always enjoy catching grief when I run horses at Keeneland and wear IU gear.

Q: Who was your favorite horse that you didn’t get to train?

Q: When did you decide to become a trainer?

A: I taught school and coached for a few years in Indiana. I always found it enjoyable to coach athletics but I wasn’t really into the teaching part of my job. I decided to make a complete change and got into horse racing and never looked back.”

Q: What was the worst excuse a jockey has given you after a poor ride?

Q: If you could go anywhere on vacation, where would it be?

A: We don’t get many days off in this industry but if I had to take some time away, I’d love to go to Aruba.

DOWN THE STRETCH – Entering Sunday’s 10-race program, Brian Hernandez Jr. was six wins away from 600 career Churchill Downs victories while Hall of Fame trainer Steve Asmussen was five wins away from 700 career victories beneath the Twin Spires. … There is a $90,261 carryover in the 20-cent Single 6 Jackpot Sunday. The sequence will span Races 5-10. … Racing is set to continue Thursday for Twilight Thursday presented by Blue Moon. The evening will feature eight races with a post time of 5 p.m. along with $1 Blue Moon drafts, $1 domestic draft beer, food trucks, lawn games, one-on-one expert betting advice and live music on the Plaza Stage. 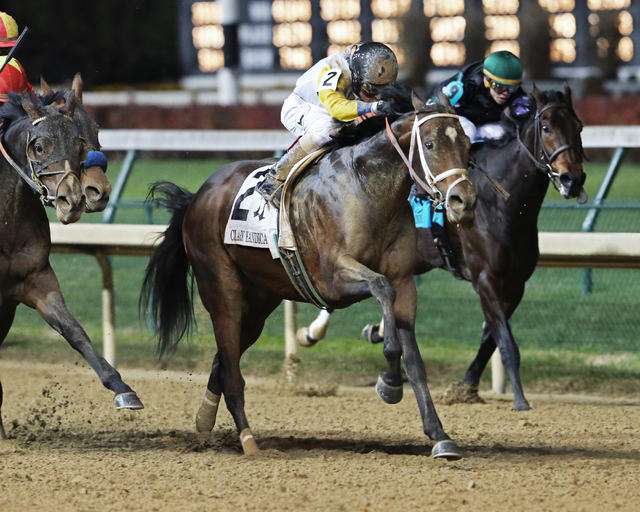