Through the first nine days of the 2019 Spring Meet at Churchill Downs, jockey Gabriel Saez is proving “grit and determination” can lead to success after scoring nine victories, including a three-bagger on Saturday’s 11-race card, to vault him into a tie atop the rider standings.

“We had a good winter down at Fair Grounds and we just need to keep riding the momentum into meet here at Churchill,” Saez, 31, said. “If I keep showing the same grit and determination each race, we can prove successful at any level.”

Saez’s three-win Saturday came after a successful Derby Week with a victory aboard Mr. Money in the $400,000 Pat Day Mile presented by LG&E and KU (Grade III).

“It’s always enjoyable to ride at the highest level in this game and that’s what you see Derby Week,” Saez said. “I’ve been lucky to be put on some very live horses that made my job much easier.”

Saez began his flurry of victories Saturday in Race 7 aboard Brilliant Racing’s Eskenforit. The Panama-native returned to the winner’s circle in Race 8 aboard Frazza Cassimeris Racing’s Cause I’m Edgy and completed his trifecta in Race 10 aboard 35-1 longshot Change of Control in the first running of the $100,000 Mamzelle Overnight Stakes.

“Gabe just gave a perfect ride on (Change of Control),” trainer Michelle Lovell said. “He was so patient and waited for exactly the right moment to ask her to run. He’s been riding great lately.”

Trained by Ian Wilkes, With Dignity rallied from seven lengths off of the early pace in the 6 ½-furlong maiden special weight contest for 3-year-old fillies to win her career debut.

“I had an idea this filly was talented all along but to win like that, on debut, was very impressive,” Wilkes said. “She started training over the winter at Palm Meadows and I had an idea to get her ready for the start of the meet at Churchill. Julien rode a great race and it was great to have the Whithams in town to watch her win.”

McCraken, who was owned and bred by Janis Whitham’s Whitham Thoroughbreds, won his career debut at odds of 5-2 before winning his next three starts that included a trio of stakes: the Street Sense, Kentucky Jockey Club (GII) and Sam F. Davis (GIII).

“That was a really strong effort for a debut,” Leparoux said. “She really dug in and had to try very hard to get by the horse on the lead (Dos Vinos). She showed a lot of determination and talent to do that.”

“She has the turf in her pedigree but she really doesn’t run like a turf horse,” Wilkes said.

“It was such a thrilling race and such a relief to finally get this filly on turf,” Lovell said. “We’ve tried and tried to get her to run on the grass but the rain kept washing off the races. She really proved herself Saturday and it was such a fun way to get our first stakes victory in our backyard at Churchill Downs.”

“In an industry dominated by males, it goes to show women are just as capable of doing the job,” Lovell said.

Lovell is a native of West Palm Beach, Fla. and became a jockey in 1988. Following an eight-year stint in the saddle, Lovell began training horses in 2003 in Texas and Louisiana before shifting her stable to Kentucky.

“I still get the luxury of riding everyday getting aboard my horse (stable pony) Elwood,” Lovell said. “I enjoyed my time riding races but I also love training and seeing horses develop.”

$245,821 SINGLE 6 JACKPOT CARRYOVER, $98,666 LATE PICK 5 CARRYOVER FOR SUNDAY – A series of longshots on Saturday at Churchill Downs triggered a trio of significant carryovers for Sunday’s 10-race Mother’s Day program beneath the Twin Spires.

The Single 6 Jackpot challenges bettors to select the winners of six consecutive races but the Jackpot pool only is paid if there is a single winning ticket. When multiple tickets contain six winners 90 percent of that day’s pool is paid out and 10 percent is added to the Jackpot carryover. Takeout on the Single-6 Jackpot is just 15 percent, which is one of the lowest multi-race wager takeout rates in American racing.

The Pick 5, arguably the fastest growing wager in the U.S., also features a low 15 percent takeout. 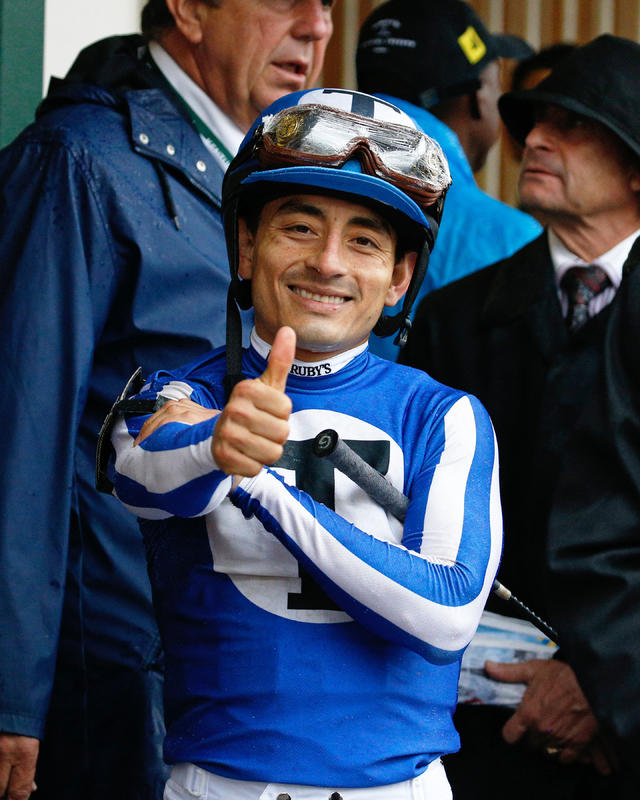