The Road to the Kentucky Derby resumes Saturday from Churchill Downs where Albaugh Family Stables’ undefeated colt Howling Time, the winner of the $200,000 Street Sense four weeks ago, tops an ultra-competitive cast of 14 colts and geldings that entered the $400,000 Kentucky Jockey Club (Grade II).

The 1 1/16-mile Kentucky Jockey Club will award points to the Top 4 finishers on a 10-4-2-1 scale toward a spot in the starting gate in the 148th running of the Kentucky Derby presented by Woodford Reserve (GI). The race will share the Saturday spotlight with its counterpart for 2-year-old fillies, the $400,000 Golden Rod (GII). The Golden Rod will award the same scale of points to the Top 4 finishers for the Longines Kentucky Oaks (GI).

“We always thought he showed some promise in his training,” Romans said. “He was really impressive breaking his maiden back in September and proved it wasn’t a fluke winning the Street Sense. His looks remind me a lot of his sire. He’s got the size and stride that make them similar.”

Howling Time will once again be ridden by Joe Talamo from post No. 5.

“It seems like every race he keeps improving,” Talamo said. “Dale said he’s doing even better going into this race than the last one. He has the right mind to him. Coming out of a sprint in his first start he had every right to get tired going two turns for the first time but he was all class. That’s half the battle right there, especially with a young horse. He sure passed the test.”

One of the other top contenders Howling Time will face in the Kentucky Jockey Club is Kentucky West Racing and Clarke M. Cooper’s 6 ½-length Saratoga debut winner Classic Causeway. Trained by Brian Lynch, Classic Causeway was the 9-5 favorite in the $500,000 Breeders’ Futurity (GI) but after breaking from post 13, he tired late and settled for third behind accomplished juveniles Rattle N Roll and Double Thunder.

“He’s always been a horse that breaks sharp from the gate,” Lynch said. “We knew that going into the debut so it didn’t really surprise us he broke on top like he did but it’s always a pleasant surprise to see them win that impressively. Last out in the Breeders’ Futurity, he was hung wide from the gate and he battled pretty hard on the lead through fast fractions. I thought he gamely held on for third after the field closed in on him. Going into this start I’ve been trying to get him to relax a little bit in his training. I’ve worked him behind horses and in company so he doesn’t have to be on the engine.”

Joel Rosario has the call on Classic Causeway from the rail.

“Tiz the Bomb was impressive last out at Del Mar after dealing with all of the pre-race incidents in the Breeders’ Cup Juvenile Turf,” McPeek said. “He’s handled really anything we’ve thrown at him so far so going back to the dirt shouldn’t be a problem for him.”

Brian Hernandez Jr. will have the mount on Tiz the Bomb from post 6. Hernandez rode Smile Happy last out at Keeneland for his victory in a 1 1/16-mile maiden special weight. Corey Lanerie will ride the Runhappy colt from post 8.

Another undefeated colt that entered the Kentucky Jockey Club is C2 Racing Stable and La Milagrosa Stable’s Florida-invader White Abarrio. The Saffie Joseph-trained colt is perfect in his young career from two starts at Gulfstream Park with a 6 ¾-length victory in a 6 ½-furlong maiden special weight and a four-length front-running score in a first-level allowance at one-mile. Florida-based jockey Edgard Zayas, who rode White Abarrio to his allowance victory, will travel to Churchill Downs for the mount from post 10. 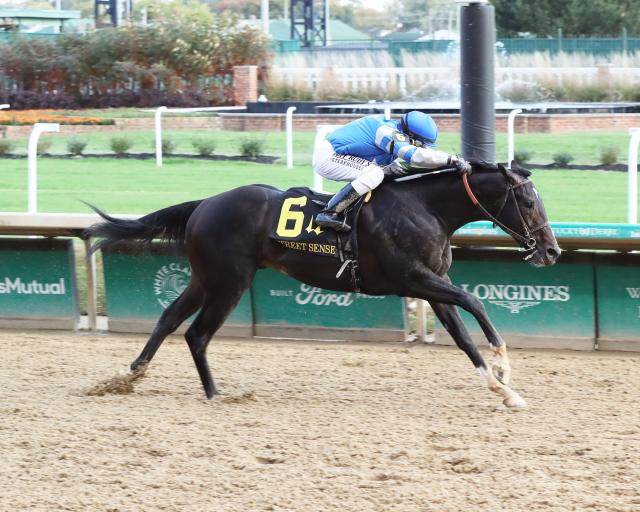