Andrew Farm and Mrs. Charlie O’Connor’s Jo Jo Air dueled 1-9 favorite Bulletin into submission and then held off a late charge from Uncapped by three-quarters of a length to win the fifth running of the $125,000 William Walker for 3-year-olds before a crowd of 22,012 on the opening night of Churchill Downs’ 38-day Spring Meet.

Bulletin, who was undefeated in three starts including a score in the Breeders’ Cup Juvenile Turf here last fall, was first out of the gate but was quickly joined on the front end by Jo Jo Air. The two hit the top of the lane together with Jo Jo Air taking control at mid-stretch.

Bulletin was another head back in fourth and followed in order by Neverland Rock (GB), Sovereign Impact and Hartel.

Racing resumes Tuesday with a nine-race program that begins at 12:45 p.m. (all times Eastern). Highlighting the program is the inaugural running of the mile and a half $115,000 Champions Day Marathon Overnight Stakes Presented by Thoroughbred Aftercare Alliance that goes as the seventh race with a 3:50 post time.

John Velazquez (jockey, Jo Jo Air, winner) – “We sort of sat the perfect trip all the way around there. Turning to the three-eighths pole, I started to make my move and she really dug in and responded gamely. It was a good kickoff to Derby Week.”

Brendan Walsh (trainer, Uncapped, second) – “I’m really proud of our effort. I think with a better break we could have won the race.”

Javier Castellano (jockey, Bulletin, 1-9 favorite, fourth) – “He was sort of flat the entire way around there. Maybe he ran back too quickly.” 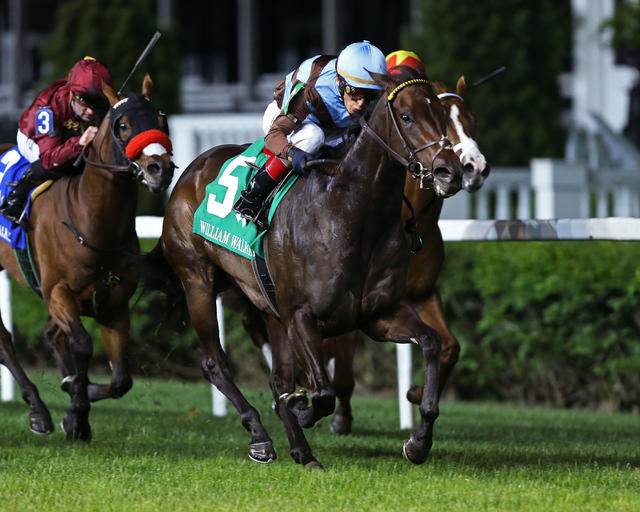